Is there really an issue with black people not supporting other black people? Or is it just something people say?

This was the question I posted on Twitter and was glad to have a few friends get involved in the conversation.

I know there is a deep rooted issue with the hesitation some black people have when it comes to supporting their own. 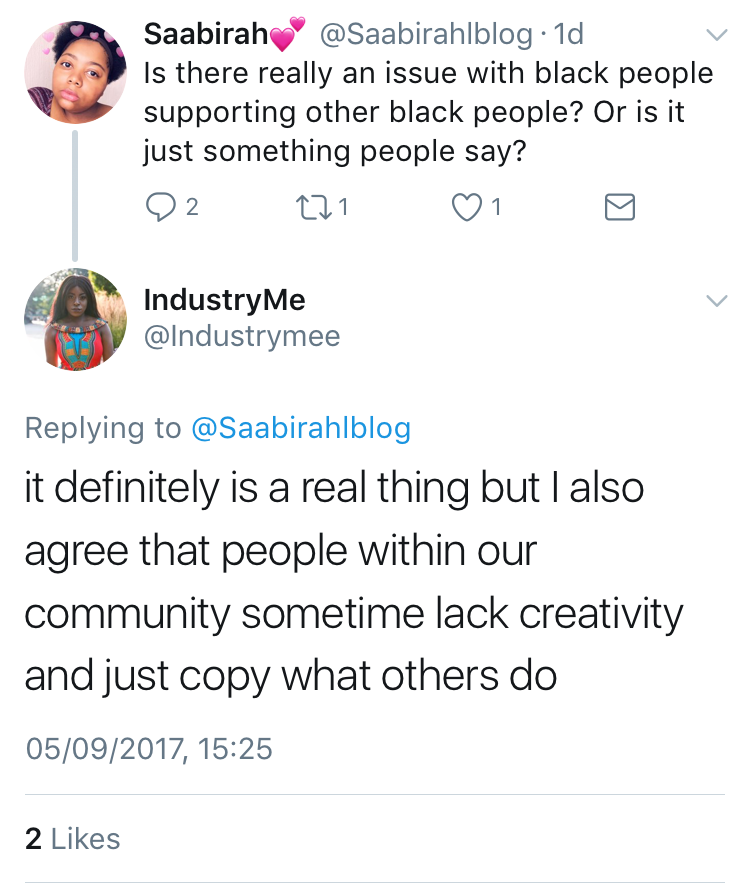 The number of black British people joining the youtube community has definitely gone up. I think it’s because youtube for a lot of people opens doors, and it gives them opportunities they may not have gotten in another field. I also think more people, especially black people want to explore their creative side. For years black parents have told us to pick; lawyer or doctor, both amazing professions however a lot of us are no longer simply seeking financial stability, but we also want to enjoy what we do, the money is essentially a bonus.

This increase is definitely noticeable, and with the way youtube is set up you just have to watch one or two black Brits enjoying life and youtube will suggest a whole new lot of melaninated creatives – cheers youtube. The increase of black creatives, youtubers, bloggers, content creators and influencers is great. Although I do think there is a lot of similarities, there seems to be a lot of the same thing, which isn’t necessarily a negative thing especially if you’re still getting those views and the interaction. 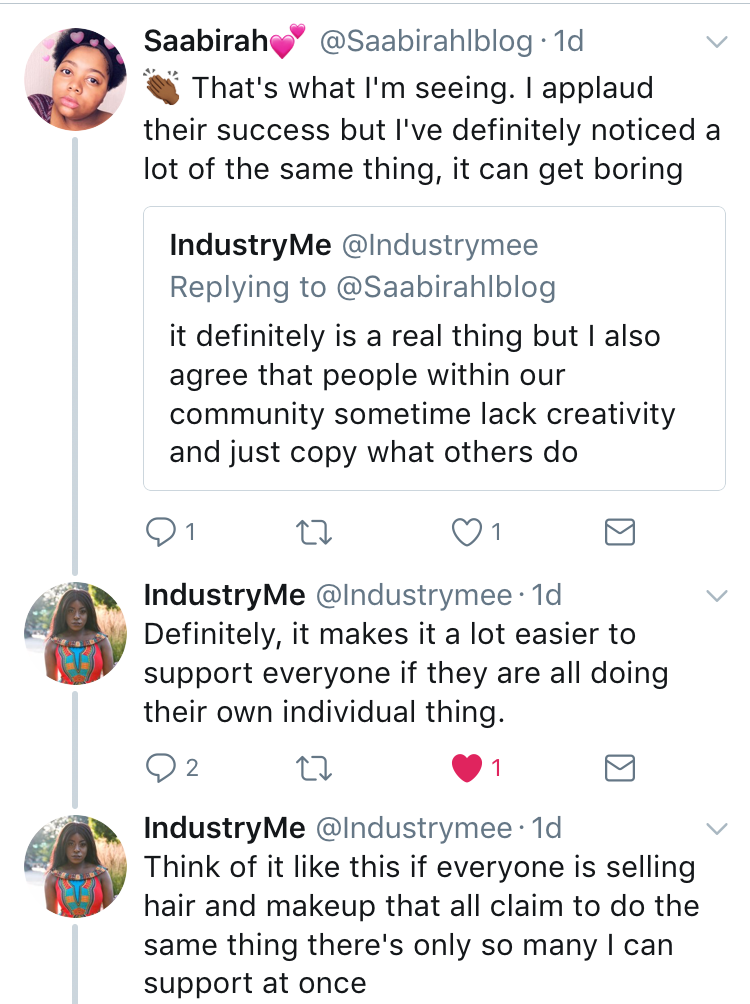 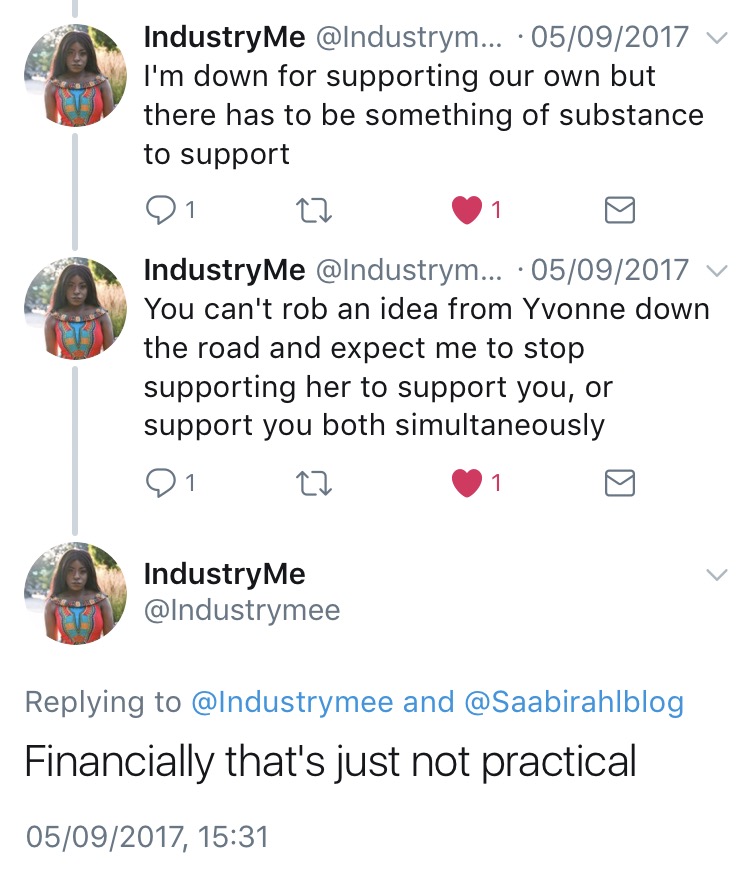 So when I ask the question; “Is there a real issue with the lack of support in the black community?” – I don’t expect a yes or no answer, it’s a topic that requires thought. It’s not as simple as black people don’t support black people. As I mentioned before I feel like the reason why some may feel they’re not getting the support they want may be due to the fact that black people want variety, just like everybody else does. I focused on the lack of variety or general personal interest, because it’s something I can relate to and found that others could relate to.

Sometimes I think some people expect automatic support because we are all black, yes I do believe there should be an authentic mutual thing where we all support each other where we can, however if someone generally isn’t interested then I can’t fault that. In a world where we are constantly growing and learning something new everyday, it would be crazy to think that people will only be into one type of thing for a long length of time.

I think anyone going into any industry should know that they have to come with some originality. Too much of the same thing can get repetitive and boring. Understanding your audience, what they like and what gets their attention is key. Also looking at the gaps, if you’re into a certain style of music but you haven’t seen any or many black people talking about it, then it would be a good idea to be the one who fills that gap. However I wouldn’t tell someone not to do something because someone else is, because that someone can bring something different or original. 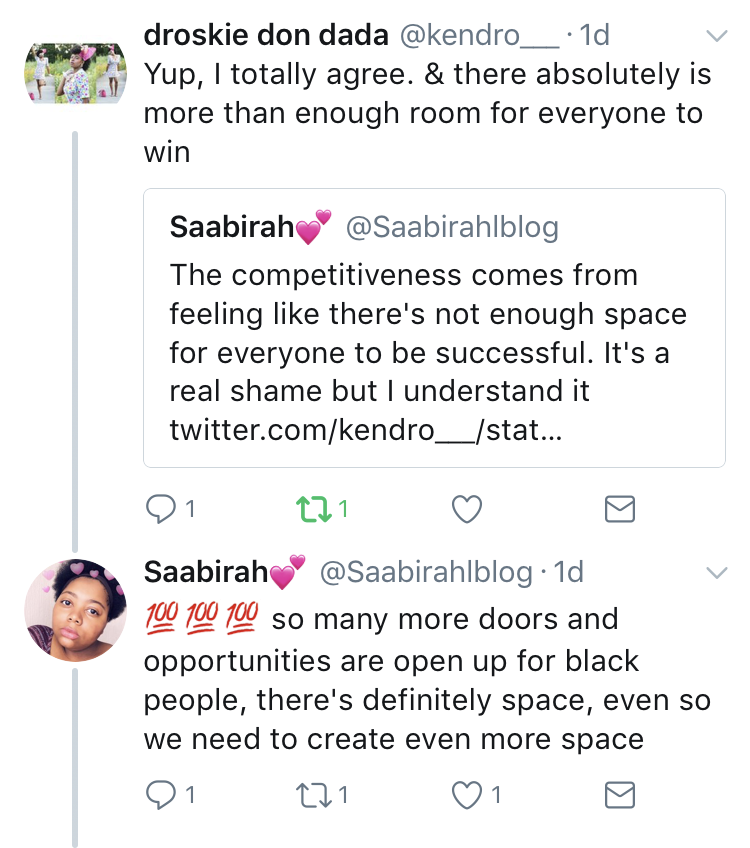 The conversation of competition always comes up. Years of black people seeing only one or a few black people reach a certain level of success tricked us into thinking that there can only be one black person winning at a time. Black people are now taking up the spaces that are rightfully theirs as well as opening doors for future generations of black people. Hopefully that means this conversation will not be continued in a few years time.

In the mainstream media, yes there is a representation problem. That is for us to do own thing, create our own radio stations, TV shows, publishing companies, studios etc. When everyone in the room is winning and black, then the idea that their can only be one will soon die out. We are aspiring to be acknowledged and snapped up by these big companies and their fake diversity campaigns *cough cough* L,Orėal *cough cough*. Like UKafrolista keeps saying “Support those who support you!“ 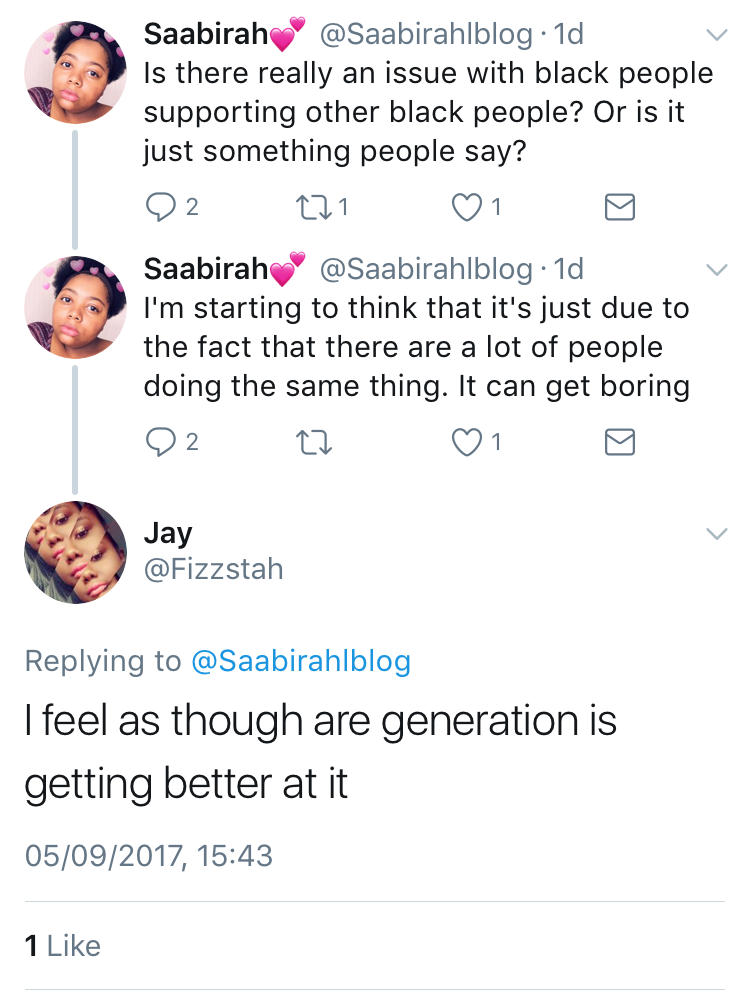 I asked the question is because I keep seeing people say “black people don’t support each other“, but from what I’ve seen from the people I surround myself with is different, the support is amazing. I do see some people who deserve a lot more support than they’re currently getting, but I know they’re grateful for the support they are already getting.